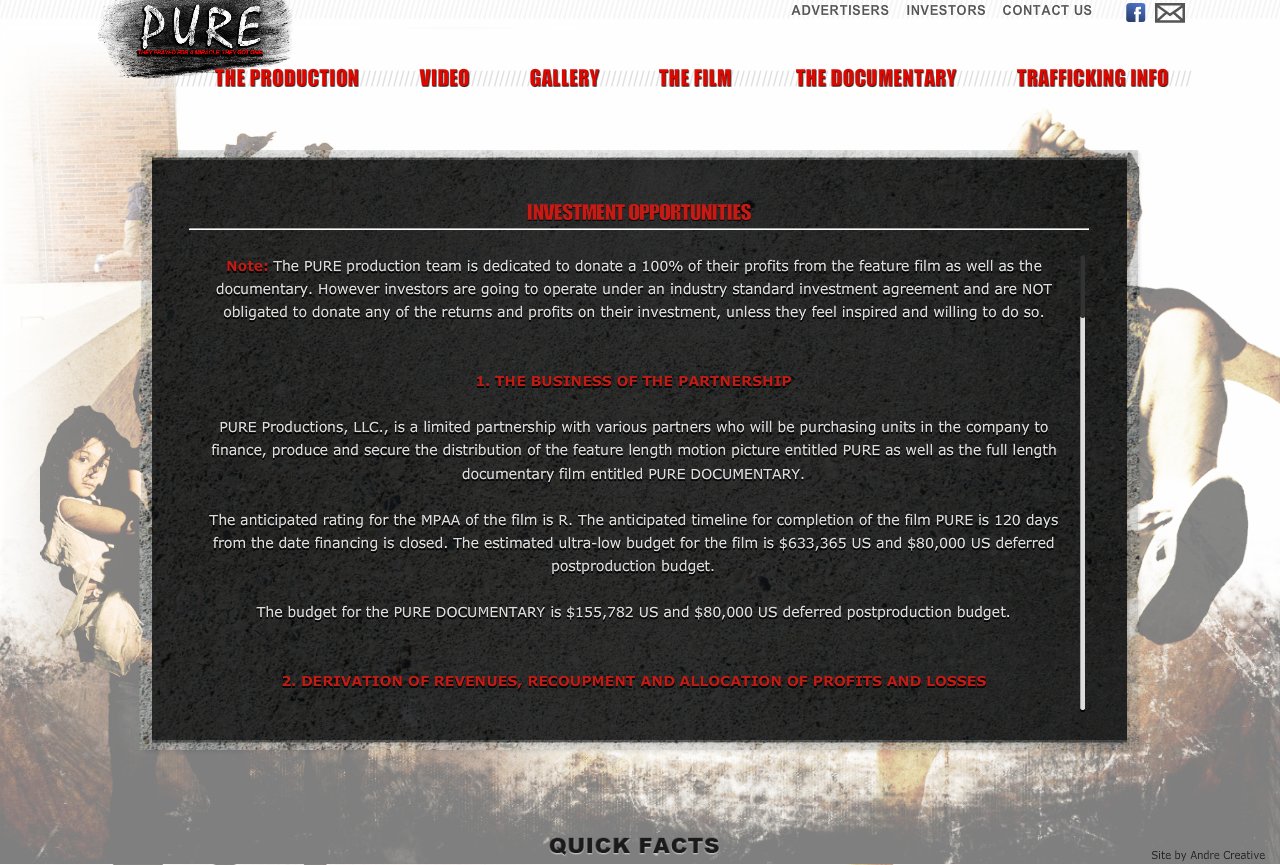 Note: The PURE production team is dedicated to donate a 100% of their profits from the feature film as well as the documentary. However investors are going to operate under an industry standard investment agreement and are NOT obligated to donate any of the returns and profits on their investment, unless they feel inspired and willing to do so.


1. THE BUSINESS OF THE PARTNERSHIP

PURE Productions, LLC., is a limited partnership with various partners who will be purchasing units in the company to finance, produce and secure the distribution of the feature length motion picture entitled PURE as well as the full length documentary film entitled PURE DOCUMENTARY.


2. DERIVATION OF REVENUES, RECOUPMENT AND ALLOCATION OF PROFITS AND LOSSES

Revenues from a motion picture are derived from exploitation of the motion picture in different media, throughout the world. The major media of exploitation are theatrical exploitation, home entertainment (sometimes called home video) exploitation (sale and rental of DVDs), pay-television (including cable and satellite distribution, and free television - network and syndicated). There are secondary media, such as non-theatrical distribution (such as airlines) and there is ancillary exploitation, such as merchandising. It is possible to make one global distribution deal with one distributor for the entire world, all media. Other methods of distribution would be to make a domestic deal, all media, and sell foreign rights territory by territory (all rights); or to break down and sell different media in the domestic market separately.

Revenues received by the distribution company are called distributors gross film receipts (GROSSES reported in the trade magazines are money received by the point of sale, such as the theatre, or the home video stores).

Distribution fees and costs are deducted from distributors gross, and the remaining money, often called producers gross, is the money received by the company.

Producers gross is applied to the companys legal accounting and other expenses in negotiating and collecting money from the exploitation of the film; then are applied 100% to the recoupment by the limited partners.

After limited partners recoupment, further producers gross is net profits, often referred to as 100% of net profits. Net profits are first applied to paying any contingent deferments to parties rendering services on the film which are payable out of first net profits, usually a fixed amount to compensate for lower cash payment for such services, after contingent deferments are paid, remaining net profits are paid 50% to the limited partners/investors, and 50% to the company.

While PURE could certainly be produced for a larger budgeted amount, but because of the unique nature and intent for this project A-list filmmakers are taking a significant pay-cut or are donating their time and talents to create high quality production value for a modest sum. This aspect alone ensures a much stronger margin of potential revenue and success for the venture.

Please contact us to request a full executive summery and budgets.

The following are examples of films that have succeeded in the same genre to give a reference point of the potential for this market.


Box-office and DVD numbers for movies in the similar genre or budget.