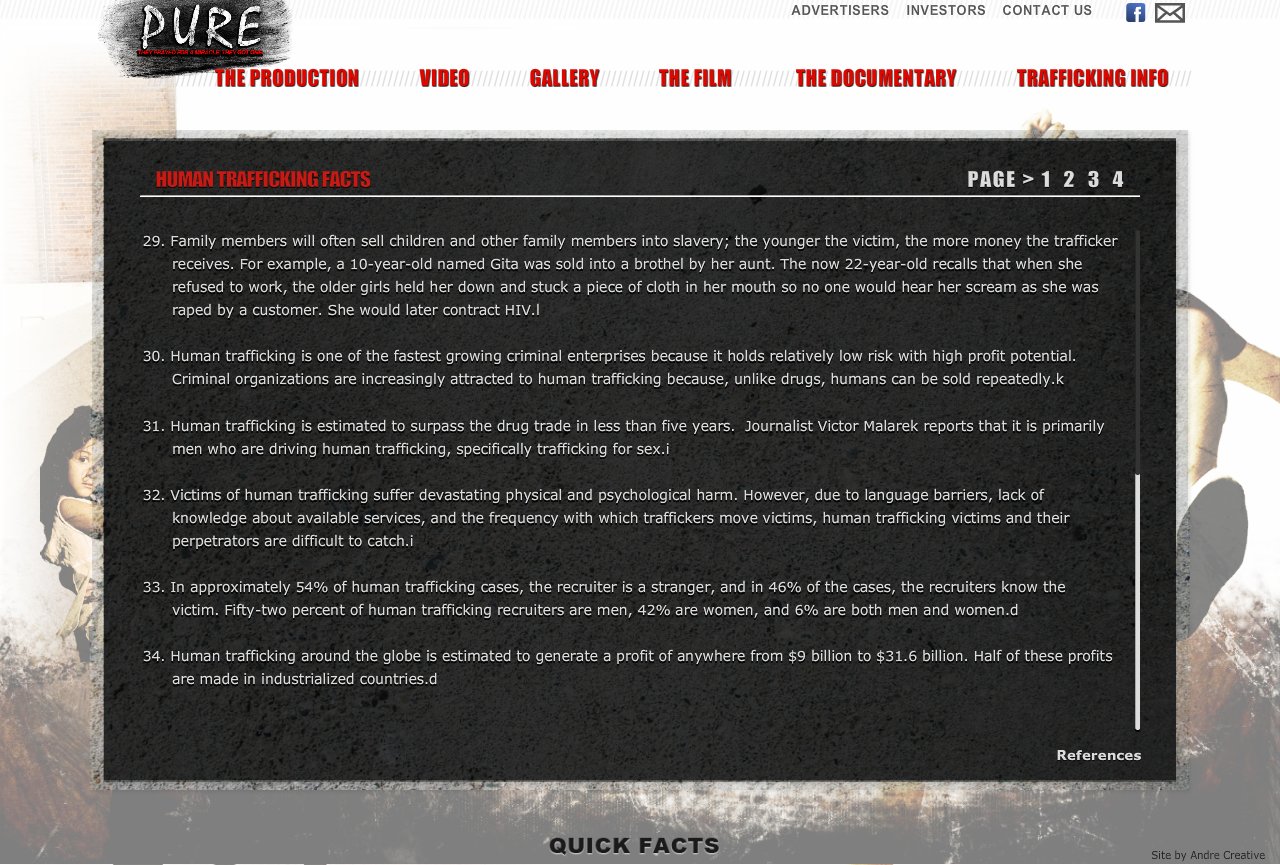 29. Family members will often sell children and other family members into slavery; the younger the victim, the more money the trafficker
receives. For example, a 10-year-old named Gita was sold into a brothel by her aunt. The now 22-year-old recalls that when she
refused to work, the older girls held her down and stuck a piece of cloth in her mouth so no one would hear her scream as she was
raped by a customer. She would later contract HIV.l

30. Human trafficking is one of the fastest growing criminal enterprises because it holds relatively low risk with high profit potential.
Criminal organizations are increasingly attracted to human trafficking because, unlike drugs, humans can be sold repeatedly.k

31. Human trafficking is estimated to surpass the drug trade in less than five years. Journalist Victor Malarek reports that it is primarily
men who are driving human trafficking, specifically trafficking for sex.i

32. Victims of human trafficking suffer devastating physical and psychological harm. However, due to language barriers, lack of
knowledge about available services, and the frequency with which traffickers move victims, human trafficking victims and their
perpetrators are difficult to catch.i

34. Human trafficking around the globe is estimated to generate a profit of anywhere from $9 billion to $31.6 billion. Half of these profits
are made in industrialized countries.d

35. Some human traffickers recruit handicapped young girls, such as those suffering from Down Syndrome, into the sex industry.l

36. According to the FBI, a large human-trafficking organization in California in 2008 not only physically threatened and beat girls as
young as 12 to work as prostitutes, they also regularly threatened them with witchcraft.e

37. Human trafficking is a global phenomenon that is fueled by poverty and gender discrimination.k

39. Women and girls from racial minorities in the U.S. are disproportionately recruited by sex traffickers in the U.S.l

40. The Sunday Telegraph in the U.K. reports that hundreds of children as young as six are brought to the U.K. as slaves each year.m

41. Japan is considered the largest market for Asian women trafficked for sex.i

42. Airports are often used by human traffickers to hold slave auctions, where women and children are sold into prostitution.m

43. Due to globalization, every continent of the world has been involved in human trafficking, including a country as small as Iceland.k

44. Many times, if a sex slave is arrested, she is imprisoned while her trafficker is able to buy his way out of trouble.l

45. Today, slaves are cheaper than they have ever been in history. The population explosion has created a great supply of workers, and
globalization has created people who are vulnerable and easily enslaved.l